Thankful for the SWITLIK CPR on Thanksgiving

My wife deserves far more credit than I give her (and don’t they all really). In particular, her patience for my annual Thanksgiving morning shenanigans is something to be marveled. The problem really centers around the fact that the morning turns into the afternoon, which turns into the early evening… and that’s when the door swings open, everybody’s mouth full of turkey and stuffing and I’m standing there smelling like fish in my foul weather gear getting the “look of death” from my beloved partner. My buddies and I have a long-standing tradition of meeting at the boat every year on Thanksgiving just before dawn for what typically turns out to be one of our last fishing trips of the season. It’s at the end of the trip, when the bite is red hot and I know that the turkey is just coming out of the oven at home that “one more cast” becomes the phrase for the next two hours, making me incredibly late for dinner.

This year, of course, was no exception to the tradition. I woke up at 4:30 to step outside and be blasted by 22-degree temperatures with a wind chill on top. It was going to be a cold one today and I was glad that I was fishing on my buddy’s 43’ express sportfishing boat with a heated cabin and helm instead of my 24’ open center console. Today’s target species was tautog (also called tog or blackfish), a fierce-fighting bottom-dweller that lives in rocky reefs and feeds on live green crabs. These fish are so delicious to eat that they are often referred to as “poor man’s lobster”.

The process for departure was simple: we load up the boat, fire up two big inboard diesel engines, take the lines off and start heading out of the slip. It was early morning still and the sun had just begun to rise over the breakwater outside of the marina. As we slowly putted out of the slip and into the harbor we became instantly aware of the frigid winds blowing about 20 knots straight out of the north. It was blowing so strong, in fact, that I could smell the deliciously warm aroma of a wood-burning stove or fireplace from one of the houses a mile away that lines the Sandy Hook Bay. I tucked inside the helm area to escape the cold in preparation for the boat to begin picking up speed and was yet again surrounded by the warm aroma of the wood-burning stove from the house on the bay. Only this time, it seemed a little bit stronger and a little bit warmer by the helm and above the engines. I stepped back into the cockpit, my senses finely tuned to attempt to pick up the wood-burning stove smell, but it had completely dissipated when the skipper throttled up the boat and we picked up speed. When I stepped back inside the enclosed helm area and smelled the burning smell, stronger than ever, I knew we had a fire onboard.

This is the point in my story where I pause to talk about some common-sense boating practices. If sinking a boat at the Hudson Canyon back in 2008 and boarding a life raft taught me anything, it was that when things don’t seem right, they usually aren’t. There very clearly was something on fire in the vicinity of our boat, and in the event that it was our boat, this needed to be inspected and handled immediately with all hands on deck. The other crucial item is being prepared to respond in an emergency. When selling or buying our life rafts, many customers and dealers categorize them as “safety equipment”. However, one of our newer dealers who doesn’t typically deal much in the line of safety equipment actually put our rafts up on their site under the category of “emergency preparation”. To me, this rang very true. Having a life raft onboard won’t keep you safe unless you need to use it, and it especially won’t keep you safe if it doesn’t work properly or isn’t sufficiently equipped or built for the task at hand. When you have to fire the raft, you’re already in a perilous situation and the raft is literally your best last chance at survival. 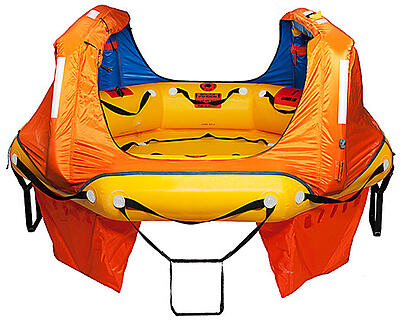 On the big sportfishing boats it’s easy to talk in terms of fuel. In my buddy’s case, his boat is burning somewhere in the vicinity of 40-45 gallons of diesel an hour when he is cruising from place to place. In terms of the cost of a SWITLIK CPR life raft, the price of the raft equates to less than “30 hours” of fuel. To put it in perspective, that’s right around five fishing trips for my buddy in the bay and surrounding near-shore ocean waters. For the price of five trips, when he makes about 30 trips each season, he bought a piece of lifesaving equipment and some serious peace of mind which should last him over fifteen years and only needs to be serviced once every five years. To me, that seems like a no-brainer, but then again, I do sell life rafts for a living.

Getting back to my story, the burning smell came from a starter on the starboard engine that did not disengage, over heated, and caught fire. Thankfully it self-extinguished and we were able to get a tow back to the dock and hop on a different boat to continue our annual tradition, and much to my wife’s delight (although maybe not, because then she had to deal with me) this year I actually beat the turkey to the Thanksgiving table!

Looking back on the story, I can honestly say that I continue to learn lessons every time I venture out on the water. My message to those reading this blog post is simple, especially during the holiday season. Look around the room at the friends and family that you cherish. Realize that no fish, no race, no wind, and no wave is worth your life or theirs. Whether you buy a SWITLIK raft or not, I only wish that you consider emergency preparation that is appropriate for your activities on the water. I am thankful that the raft onboard my buddy’s boat was only needed for peace of mind, but in the event the situation further deteriorated I was relieved to have an option for escape and a barrier from the freezing temperatures and the water if we needed it.